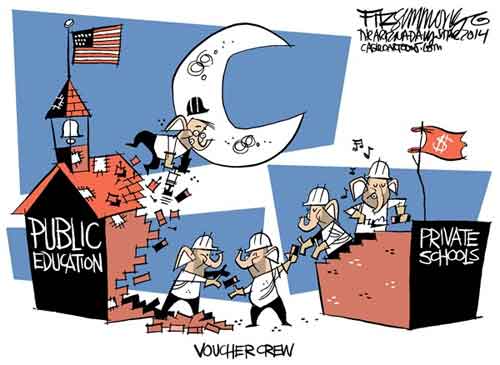 Betsy DeVos and Doug Ducey got their way. Universal vouchers are now Arizona law. Despite an exhaustive analysis from the Arizona Republic showing that vouchers help rich families from more successful districts — despite program accounting that’s “opaque, incomplete and riddled with errors” — despite polls showing Arizona voters oppose voucher expansion more than two to one — and despite Arizona’s Constitution (Article II, Section 12: “No public money or property shall be appropriated for or applied to any religious worship, exercise, or instruction, or to the support of any religious establishment”) — the Legislature shoved these bills down the public’s throats anyway. This opinion column by Laurie Roberts covers it all.

Dark money (spending by organizations that do not disclose their donors) played a large role in the passage of these bills. Have a look at this spreadsheet: the Arizona Leadership Fund, a dark-money PAC chaired by Ducey, financed Republican candidates in 2016 for our state’s legislature to the tune of nearly $100,000. Almost all of the successfully elected candidates financed by this PAC voted yes on the ESA expansion. Eleven campaigns, including those of “moderate Republicans” Regina Cobb and Maria Syms, received the maximum $5,000 donation. (This is public information, available on the Arizona Secretary of State’s web site.) Ducey also has a separate PAC, Arizonans for Strong Leadership, that you’ll see in the spreadsheet. That PAC spent almost twice as much in targeted districts to ensure the election of certain Republicans. That’s not even all. Other dark money groups spent too, dropping almost $500,000 on these races. According to an Arizona Republic analysis, the American Federation for Children — a group founded and chaired by Betsy DeVos — spent more than anyone else.

Any legislators who didn’t find themselves persuaded by these generous contributions received a personal strong-arming from the governor. The Arizona Republic reports that Ducey called a series of legislators into his office and pressed them to vote yes. After the vote, Americans for Prosperity (the “educational arm” of the Koch Brothers PAC) tweeted its pride in having pushed for the bills. Betsy DeVos, a seven-figure backer of that PAC, also tweeted Ducey her congratulations the same night. And that enrollment cap that made this legislation palatable enough for “moderates”? The same day the bill passed, lobbyists were already promising to remove the cap. Saying it was a sad day for Arizona doesn’t begin to cover it.

But this issue is not over. Poll  after  poll shows that Arizonans are demanding increased funding for education. Nearly 4 in 5 of us want more money for our public schools. The results transcend political party, race, education level, gender, and location. Ducey is trying to position himself as an “education governor,” but he is giving away $4,400 per student to private schools while advocating $180 raises for teachers. That’s not just inadequate, it’s insulting — and extremist. It’s not even close to what the mainstream wants. 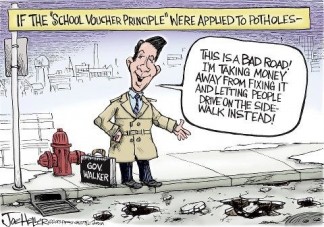 Our legislators are now turning their focus from defunding public schools to screwing the public via the budget. As they continue to meet behind closed doors to decide how our tax dollars are spent, Arizona languishes at the bottom for per-capita school spending. Our lawmakers say that’s “enough.” Meanwhile, they will spend our tax dollars on defending this unconstitutional law in court. I don’t know about you, but I’ve had “enough” all right. Are we going to put up with this?

Every single one of us who cares about education in Arizona should be shouting from the rooftops, starting yesterday, about the appalling inequity of this decision. Gov. Ducey was the driving force behind the DeVos-financed push for these bills. Call his office at 602-542-4331, then reach out via Facebook or Twitter, and tell him his strong-arm tactics at the expense of our public schools will not fly with us, the voters. Tell him that we, not dark money PACs, are his true employer. Tell him he must truly fund education, especially now that he’s giving away the store. Then call your legislators and tell them the same thing. If the public doesn’t have a seat at the table for budget talks — talks that will likely happen within the next couple of weeks — we will be on the menu. We must push hard! Talk to your friends, use social media, write letters to the editor, and don’t stop calling.

There’s one other thing we must do, and that’s focus on the long term. One-party rule creates an environment ripe for this type of corruption, and we’ve had that at the Capitol for years. It should be clear by now that nothing will change in our state until we change our legislators.

Here are three simple actions you can do to create change:

The 2018 elections will be here before we know it, and all of us must work together to remove these sellouts from our Legislature. We need to use all the time we have between now and next November to do it. We cannot simply tell them “represent us, or we will replace you.” We’ve got to follow through.

On to the rest of the bills…

Request to Speak is over, other than the odd bill in Rules (which can meet any time from now until the session ends). After Rules, a bill can head straight to the floor and get rammed through in short order — as we saw last week. Be proactive and contact your legislators now on the bills that concern you. Here’s my overflow doc with all the bills I’m tracking that aren’t yet moving.

If you want to know when the budget drops, it’s really important that you sign up for the AZ Act Now text alert system. Those of you already using the system know how helpful it was for spreading the word when the universal voucher bills started moving. The budget moves infamously fast, on purpose; in previous years, debate has happened in the middle of the night. The majority party does it to stifle public input. This texting tool gets around that. Please take a minute now to go get your cell phone. If you’re in (for example) CD6 and LD28, send a text to 602-362-9111 with the words ACTION ALERTS CD6 LD28 (replacing the district info with your own info)  (Look up your CD and LD here.)

”What Can I Do?”: This Week’s Easy Actions

This action is the same as last week, because our state is still giving away $12 billion every year in corporate tax exemptions! SB1144 would impose a sunset on these loopholes. After eight years, unless an exemption is brought up for debate and renewal, it would automatically expire. This regular review would force our legislators to consider whether it makes sense to continue carving out so many loopholes. Sounds like a good idea, right? At a time when our schools are fighting over scraps of funding, “Animal Farm” style, why would we not want to just take a look at our existing exemptions to be sure they still make sense?

Shockingly, this bill is not only still alive, but seems to be enjoying vast bipartisan support (it passed the Senate 28-2). It’s also passed out of its House committee, which means it is still in play despite the late stage of our legislative session. It just needs to be reviewed by Rules, which can happen at any time, before it can move to a floor vote and then the governor’s desk.

On the Governor’s Desk

SB1254: Removes the requirement that charter schools within school districts under desegregation orders must admit students who live in that school’s attendance area. Desegregation funding mainly pays for teachers and programs to improve opportunities for disadvantaged children in some of the poorest areas of the state. If you want background, here’s a good article (from last year, but still relevant since all the same shenanigans are afoot). On the governor’s desk 4/6. OPPOSE.

SB1344: Striker bill! Removes local control of firearms regulation by prohibiting “political subdivisions” from enacting any regulations. This means cities would no longer be allowed to set their own rules. Opposed by cities and counties, but receiving organized support from pro-2nd Amendment groups. This passed with support in committee and on the floor from Maria Syms (R-28), who some thought might oppose as she has shown some gun sense previously. On the governor’s desk 4/6. OPPOSE.

BILLS ON THE FLOOR: Coming up for a vote! Contact your legislators!

These bills are scheduled for the floor. Agendas are often released only the morning of the vote, so be proactive and contact your legislators in the appropriate (crossover) body now. If you want to see the others, look at my overflow doc of bills waiting to be scheduled.

HB2022: Legalizes shooting rats and snakes with your .22 (yes, really) as long as you use a special shot. Receiving organized support from 2nd Amendment groups. Scheduled for 3rd/final read Monday 4/10. OPPOSE.

“Wow! Where are all the bills?”

Yes, floor activity is lighter because of budget negotiations. But also: I’m tracking 25 bills waiting to be assigned to a calendar. Another 15 bills are ready for Rules, which can still meet at any time. This means all the bills we’ve been watching all session — desegregation funding, 9th circuit division, firearms, police in schools, voters’ rights and more — these bills are still alive. Floor calendars and committee agendas come out with 24 hours notice, sometimes less. Please plan to check this doc daily.

Are you ready to make a change?

By now each of you should have been to at least one, but more probably two or three of your local legislative district meetings. Now consider taking another step, to work toward community-building with your neighbors. Precinct committee people act within their parties to build relationships, listen to voter concerns and communicate them to leadership, and grow the direction of their party. The Maricopa County Recorder’s office shows thousands of PC slots unfilled. Our communities need more PCs out there building bridges and working for the common good. As President Harry Truman said, “The most important job I ever held was that of precinct committeeman.”

Remember, our LDs control who runs for office, and those who run for office write the bills. Getting involved at the local level is how we elect better legislators and end up with legislation that reflects our values.